When to Overhaul a Diesel Engine 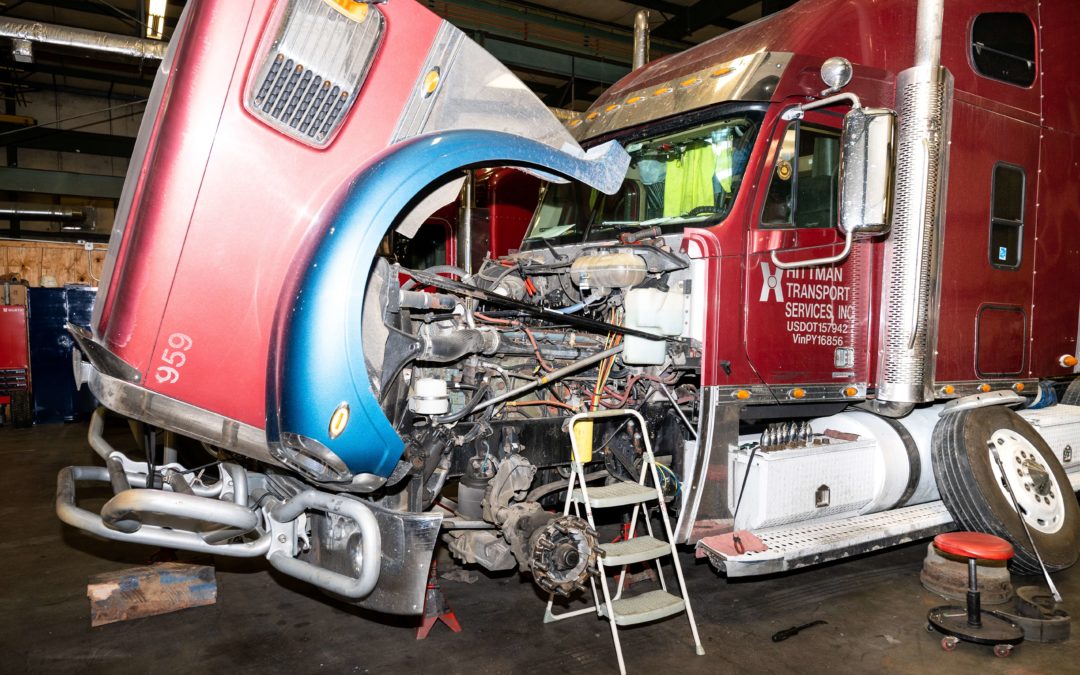 The diesel engine is the workhorse of the automotive world. It powers the heaviest loads, from trains to tractor-trailers, and can last for a million miles or more—if properly maintained. Part of that maintenance includes an engine overhaul at some point in every diesel engine’s lifetime, to examine all its components for wear and tear, replace or repair damaged parts, and clean the engine from particle and grease build up. But having your engine overhauled is a costly decision, so it pays to know the right time to do it as well as the consequences of putting it off.

What is a Diesel Engine Overhaul?

A diesel engine overhaul is when a mechanic takes apart an engine and replaces a significant number of engine components in order to restore full power and functionality. The specific parts and amount of replacement varies on a case-by-case basis, depending on whether there has been any kind of engine failure and on the engine’s repair and maintenance history.

Disassembling: Diesel mechanics take apart the upper and lower half of the engine.

Cleaning: Mechanics clean each part of the diesel engine to remove particle build up and make examining each part easier.

Inspecting: Diesel mechanics inspect each engine component to assess its condition and whether or not it needs to be replaced. Typically, an overhaul involves replacing cylinder packs and all associated gaskets. Injectors and the water pump might also need to be replaced, and the mechanic will examine the camshaft, rocker arms, turbocharger, crankshaft and gears for wear.

Repairing: Mechanics repair the parts that can be reused and reassemble the engine with the replacement parts.

Testing: Many diesel engines have a series of factory-approved procedures to test the engine’s power and function.

How Much Does a Diesel Engine Overhaul Cost?

Overhauling a tractor-trailer engine can vary depending on the engine make, overhaul level and the experience of the mechanics performing the work. Typically, certified engine overhauls range anywhere from $20,000 to $40,000. Diesel engine overhauls aren’t cheap, but they do cost a lot less than a new tractor trailer (between $75,000-$180,000). And, unlike an engine failure, you can usually plan for an engine overhaul.

Signs You Should Consider an Overhaul Your Truck Engine

The biggest sign that your tractor trailer needs an engine overhaul can been seen on the odometer. Well-maintained trucks can last up to 1,000,000 miles, but best practice notes that at 700,000 miles or more, a diesel engine should be overhauled. Replacing key parts like a head gasket or injectors can buy you time, but to avoid a catastrophic failure, you need a full engine overhaul.

Some signs you might need an engine overhaul include:

High Blowby: Blowby is the compressed fuel and air mixture that leaks past the piston and into the crankcase. High blowby, where piston and piston ring wear allow excess gases to escape, can cause higher oil consumption. The root causes of high blowby can include turbocharger issues, worn valve guides or cylinder head issues; and diagnosing the problem requires a thorough look at your diesel engine.

Rough Idle: Engines can ‘hunt’ while idling—revving up and down in an attempt to balance fuel and compression or to burn off extra oil from worn components. They can also ‘miss’ during an idle, a.k.a. hesitate, which is usually caused by malfunctioning injector or improper valve clearance. If your tractor trailer has an unusually rough idle, it might be time to examine its engine functionality.

Lower Fuel Economy: A decreasing fuel economy is one of the key indicators you’re losing diesel engine power and functionality. While poor mileage can indicate a lot of things—from issues with your camshaft to contaminated fuel or filter or injector issues—a consistently lower or decreasing fuel economy is a sign that you might want a diesel mechanic to examine your engine.

High Coolant or Oil Consumption: If your diesel engine is suddenly using up more oil or coolant, it might indicate an oil leak, cracked cylinder head or gasket, or faulty cylinder liners and O-rings. Getting the engine checked can help you avoid an irreparable engine failure caused by overheating. If oil is burning or leaking, it can cause additional problems if not addressed right away, resulting in a more expensive repair.

Blue Smoke: Blue smoke under the hood indicates your engine is burning oil—usually excessive oil on the cylinder wall—along with fuel.  Because the engine components are worn, the clearances can’t fully remove the oil. An engine compression check can help identify where the issue is and whether you need more extensive repair.

Oil Analysis: Many diesel truckers are also turning to analyses that identify high metal concentrations or contaminants in oil to determine when to overhaul an engine. Oil analysis can also identify if unfiltered air has entered the system. Oil analysis works best if it’s done regularly so samples can be compared, and you can monitor how levels rise over time and consider an engine overhaul if they suddenly spike.

Engine Failures an Overhaul Can Fix

It’s always best to opt for an engine overhaul before your engine fails, but—depending on the cause—engine failure doesn’t always mean that you need to purchase a new tractor trailer. There are several instances where parts come loose within the internal engine which require an engine overhaul, but the diesel engine can be repaired:

There are severe consequences to putting off an engine overhaul, ones that completely decommission a diesel engine. While every situation is different, some common engine failures that an overhaul can’t fix include:

Seized Engine: An engine usually seizes because the lubrication system failed, often due to an undiagnosed oil leak. If oil levels get too low, the engine can overheat, melting cylinders or causing a cracked block. A cracked block means you lose nearly all engine power. If any part of the engine begins to melt, warp or crack from overheating it can be impossible to disassemble.

Blown Engine: When a broken timing belt snaps, it ‘blows’ the engine, causing severe damage to valves and pistons. If you’re lucky, the piston will simply hit the valves, and you’ll need a valve repair. But if the piston parts get into the oil pan, they will damage the internal engine components. Too many internal components damaged, and it’s better to start again with a new engine.

If a mechanic is going to take apart your truck’s diesel engine and put it back together, your livelihood and safety depend on their expertise. That level of trust requires more than word of mouth recommendations. ASE Certified mechanics undergo extensive testing to demonstrate knowledge of the skills necessary to diagnose, service and repair engines. ASE has a specific series dedicated to Class 4 through Class 8 trucks and tractors, and an even more specified certification for diesel engines within that category.

CDS’s ASE-certified team of diesel mechanics are experts in diagnosing and treating all semitruck automotive issues and conducting extensive repairs and engine overhauls. Equipped with the latest technology in the field, our knowledgeable team has the know-how and the muscle to get your diesel truck fixed the right way and always on the first try— because we believe in quality service that gives our clients peace of mind when they’re out on the road. Contact us at cdspros.com to make an appointment, or stop in our Knoxville location today and we promise that we will have you taken care of and back on the road in no time.